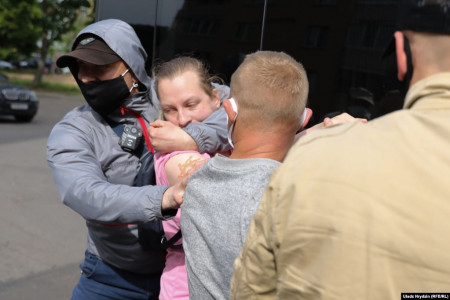 Belarusian Christian Democracy Party is pleading for close attention to the situation prior to the Presidential elections scheduled for 09 August 2020 and active solidarity with the people of Belarus.

BCD co-chairman, Mr. Pavel Seviarynets was arrested on 07 June 2020, on 15 June his wife got the news from his co-prisoner, that all personal belongings were taken from Pavel – food, medicine, even a toothbrush. He was sent to the punishment cell twice in a week. He received two new charges and was sentenced to 30 more days in prison. Now Pavel will have to stay in jail for at least 75 days. BCD considers this treatment as tortures.
Mr. Vital Rymasheuski will face a charge of participating in an sanctioned rally on 07 June. He did not participate in the rally, but according to today’s news from the courts, the sentences pronounced to other people who did not take part in the rally, include arrests. Therefore, it is highly probable that Vital Rymasheuski will be seized tomorrow.
BCD activists and members of the initiative group of Ms. Volha Kavalova, BCD co-chair and candidate for the position of presidential candidate, face harsh repressions just for taking part in the election process. Some are already in prison; Ms. Eva Saphyhina has disappeared after the election picket on 14 June and it is expected that she is also serving an administrative arrest.
As we already reported, Volha Kavalkova, according to the punishment for taking part in the protests against integration with Russia in Minsk in December 2019, restricted her in the right to travel abroad and in the right to drive her car. Her flat, car and bank account are under arrest.
According to the Human Rights Center “Viasna” from 6 May 2020 to 10 June 2020 90 people received a total of 1,093 days of arrest under administrative articles used for political persecution. 102 people received fines totaling about 86,000 rubles (approx. 32,000 Euro).
We call on our colleagues from the EPP and sister parties to take steps of active solidarity with the people of Belarus suffering from brutal repressions and the leaders and activists of the BCD – to adopt statements in the national parliaments, send private/group addresses, etc. You can forward your voices of support to the Administration of the President of the Republic of Belarus, Head of the Administration : Igor P. Sergeenko, Phone: +375 17 222-32-17, fax: +375 17 226-06-10, Post address: 220016, г. Minsk , K. Marks Str., 38, Email: [email protected], website: http://president.gov.by/en/. The contacts of the Ministry of External Affairs http://www.mfa.gov.by/en/contacts/