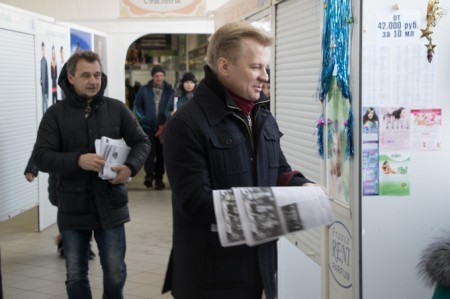 The declaration of cooperation among center-right organisations – Belarusian Christian Democracy Party, Belarusian Popular Front Party, “For Freedom” Movement and United Civil Party – was signed in November 2015. The declaration is marked by the fact that it has a distinguished signatory, President of the EPP, Mr. Joseph Daul.

Among the priorities of joint efforts there are:

– Protection of independence of the Republic of Belarus and countering threats to the sovereignty of Belarus on the part of Russia, including the fight against Russian propaganda and its disseminators in Belarus;

– Promotion of maximum rapprochement of Belarus and EU countries and broad awareness of Belarusian citizens about the benefits of the European choice of the country;

– Holding free and fair elections in the Republic of Belarus in accordance with international standards and OSCE recommendations;

– Cooperation and support of candidates during the parliament elections in 2016;

– Protecting the rights and interests of the citizens of Belarus;

– Development of projects of economic and political reforms, as well as implementation of social and political campaigns to support them;

– Development and strengthening of relations with partner centre-right parties in the Euro-Atlantic area with the purpose to return Belarus to democracy and into family of free European nations.
– etc.

The leaders of the coalition implement a programme of solidarity with the Belarusian small businesses and individual entrepreneurs. In December 2015 and January 2016 they are visiting regional centers such as Babruisk, Dziarzhynsk, Zhodzina, Maladzechna, etc.