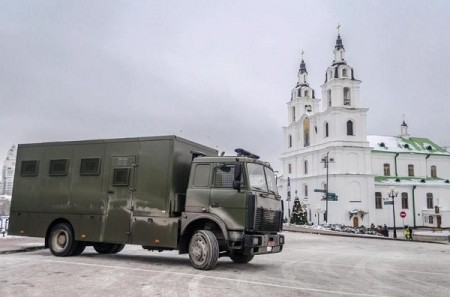 Mikalai Verameyenka, leader the Young Christian Democrats in Hrodna was fired from work in December 2016. This is not the first case of repressions against Verameyenka’s family.

In October 2016 Ales Masiuk was dismissed from his job in Slonim (Hrodna region). He ran as a candidate during the elections campaign to the House of Representatives in 2016. Ales Masiuk worked as a teacher. The formal reason for the dismissal was his participation in the seminar organised by BCD’s sister party from Norway, KrF, in September 2016. After the dismissal of Ales Masiuk already got ten (10) unlawful refusals from employers, because the city administration in Slonim has given an informal order to education institutions not to hire Ales.

In Maladzechna (Minsk region) bailiffs are blackmailing Raman Hancharou, the head of Maladzechna district organization of BCD. They threaten Raman with the confiscation of property for administrative fines imposed for his participation in the parliamentary campaign 2016 and civil protests. The bailiffs order Raman Hancharou to leave Maladzechna.

The BCD sees this wave of repression as the reaction to its activities and successful campaigns in 2016 and as a kind of “gift” of the regime for the 100th anniversary of the BCD. We draw the attention of international human rights organisations, the governments of democratic countries of the world to the fact that despite the formal “warming” of relations between the government of Belarus and the democratic world, the repressions against democratic activists in Belarus do not stop. This suggests that the essence of Belarusian regime does not change and the change of rhetoric in international relations does not positively influence the compliance with human rights and democratisation in Belarus.

We call on the governments of democratic countries in the world and international human rights organisation for solidarity with Belarusian democratic activists! We call on all colleagues, who engage in the negotiations and dialogue with the authorities of Belarus, to require the cessation of the repressions against activists of the BCD, as well as other democratic organisations and Belarusian citizens.