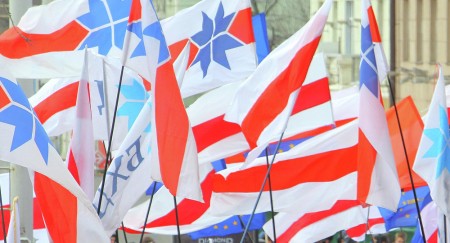 On 7 March 2017 in Zaslaue (Minsk region) two unidentified men in civilian clothes (allegedly juridical executives) entered the enclosed grounds of the semi-detached residential house, where Vital Rymasheuski, co-chairman of the Belarusian Christian Democracy Party, lives together with his family and his mother in one of the apartments. According to the neighbours, the bailiffs walked on the private territory, photographed, interviewed the neighbours. However, they did not ring the bell at the entrance to the apartment. Rymasheuski’s wife saw the men from the window, but they fled before she went out.

Vital Rymasheuski does not have any outstanding fines for his public activities. He did not receive any summons from the court or calles to his mobile phone prior to the incident.
Belarusian Christian Democracy Party sees this incident as an attempt to exert pressure on the co-chairman of the BCD in the view of his active involvement in the protests, e.g. against the Presidential Decree No. 3 “on preventing social dependency”, and in order to intimidate him. BCD draws attention to the fact that in 2010, when Vital Rymasheuski was in the KGB jail, he received direct threats to his family, including his young daughter, from the KGB.

BCD demands from the authorities to immediately stop the pressure on and repressions against the co-chairman of the Belarusian Christian Democracy Vital Rymasheuski, and also the regional activists of BCD!