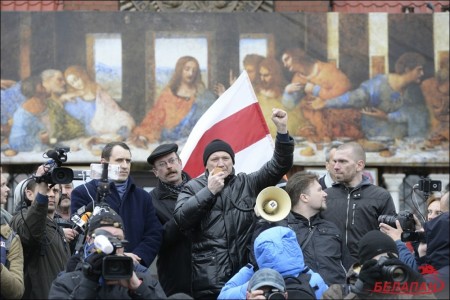 1 May in Belarus was marked by various actions of solidarity connected to the International Workers’ Day.

The authorities did not allow the Belarusian Congress of Independent Trade Unions to hold a “Solidarity March” in Minsk. The Minsk City Council allowed only a meeting in the off-center park of People’s Friendship. The organisers cancelled their plans for the march and the meeting.
However, several hundreds of protesters gathered on 1 May at Kastrychnitskaya square, held a peaceful meeting and marched to the Nezalezhnasci square, where another meeting was held and the rally was over. Later several politicians and political activists, who took part in the rally, were arrested.
Pavel Seviarynets, BCD co-chaiperson, was among those, who spoke at the meeting at Kastrychnitskaya square, he was arrested and convicted to 15 days in jail. This is already third arrest for the politician this spring. The BCD requests to support Mr Seviarynets with public statements of solidarity.
A number of sanctioned street activities to place in the regional centers in Belarus. Vital Rymasheuski, BCD co-chairperson, and Volha Kavalkova, Christian Democratic Movement chairperson, were stopped by the road police six times on their way to a sactioned solidarity action in Homiel. However, both politicians managed to reach the city and take part in the solidarity rally. Vital Rymasheuski was fined by the road police.
In Brest six people were detained on 1 May for holding a blank sheet of paper.
The Belarusian Christian Democracy Party would like to draw attention to the fact that the Belarusian authorities take all measures to stop the citizens from implementing their rights for freedom of expression and freedom of assembly. In this situation we see the arrests and repressions against the peaceful protesters as unlawful.
We would also like to underline that the conditions of prisoners during administrative arrests are inhuman – unacceptable sanitary conditions, food, intentional placement in prison cells of dangerous and/or ill prisoners, etc.
The BCD calls for solidarity with those, who face repressions and ill-treatment from the side of the Belarusian regime.