Pavel Seviarynets arrested for the third time within two months 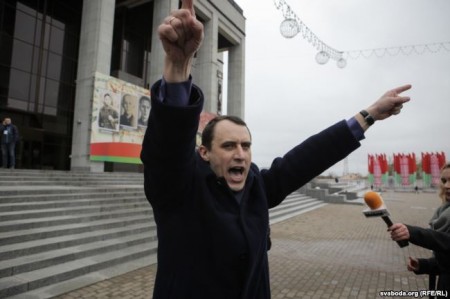 1 May 2017 in Belarus was marked by various actions of solidarity connected to the International Workers’ Day.

The authorities did not allow the Belarusian Congress of Independent Trade Unions to hold a “Solidarity March” in Minsk. The Minsk City Council allowed only a meeting in the off-center park of People’s Friendship. The organisers cancelled their plans for the march and the meeting.
However, several hundreds of protesters gathered on 1 May at Kastrychnitskaya square, held a peaceful meeting and marched to the Nezalezhnasci square, where another meeting was held and the rally was over. Later several politicians and political activists, who took part in the rally, were arrested.
Pavel Seviarynets, BCD co-chaiperson, was among those, who spoke at the meeting at Kastrychnitskaya square, he was arrested and convicted to 15 days in jail. This is already third arrest for the politician this spring. The BCD requests to support Mr Seviarynets with public statements of solidarity.
Interestingly, the policemen, who witnessed against Seviarynets, said they detained him at Kastrychnitskaya square in downtown Minsk soon after the rally. The politician states he was arrested at Pushkinskaya underground station (it is about 15 minutes by metro from the square). His words may be confirmed by Belsat TV journalists who showed him off to Pushkinskaya metro station. But the judge believed the policemen in spite of the fact of Pavel Seviarynets’ being out of reach after the protest.