Christian-Democratic Movement of Belarus changes its name and strategy 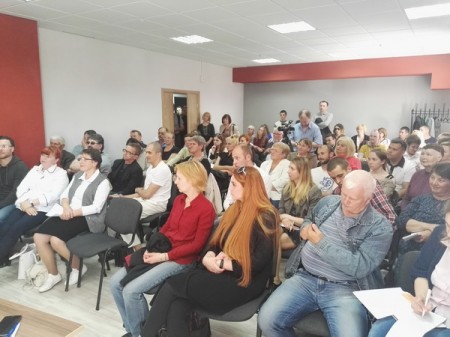 The second Assembly of the Christian Democratic Movement (CDM) took place in Minsk on May 27. It was founded on November 14, 2015, but for political reasons the organisation was denied state registration and was forced to act as an organising committee. Nevertheless, many new activists joined CDM. More than half of those attending the Assembly joined the movement during the last year.

At the Assembly it was decided to make a number of important changes that should help the further development of the organization. In particular, the meeting’s participants voted to change the name to the Social-Christian Movement not to be confused with the Belarusian Christian Democracy Party and to put the focus on socially relevant activities. Meanwhile the organization is still based on the Christian and democratic values . “We are not a political party, as organisation we will not participate in elections, our goal is to assist solutions to the social problems of the Belarusian society,” Volha Kavalkova, who was re-elected the Chairwoman of the Movement. Maksim Hacak was re-elected Deputy Chairman.

The fields of work of the Social-Christian movement for the near future were also discussed. The participants are willing to be engaged in reforming the housing and communal services, law enforcement and judicial systems and practices, solving problems of detention in prisons, improving the situation and attitudes towards people with disabilities and their guardians, protecting animals, and socializing those released from prison, the complete liquidation of the gambling industry, the memorialisation of the victims of Communist repressions, the expansion of the Belarusian language usage in the education system and so on.

“I’m glad that you are ready to deal with important social problems. We will fight the problems until they are resolved,” Volha Kavalkova summed up the results.