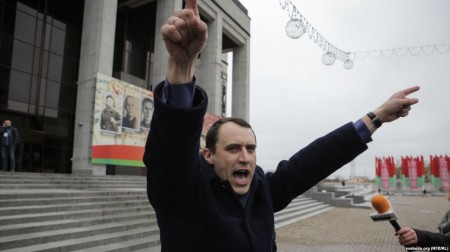 In the evening of 11 October 2017 co-chairman of the Belarusian Christian Democracy Party (BCD) Pavel Seviarynets, was arrested and put to jail for fifteen days for participation in the street protest action in defense of the independence of Belarus, which took place on 8 September 2017 in Minsk.

The arrest was made without warning, when Seviarynets went out from home to meet his pregnant wife from work. He was not given the opportunity to say goodbye to her and take the things prepared in advance for prison. It should be noted that the arrest was scheduled in the way to prevent Seviarynets from participation in the next street protest to take place for 21 October.
The conditions of detention in the Center for Isolation of Offenders in Minsk as well as in other Belarusian cities are often menacing to health. In the spring of 2017, when Pavel was serving his sentence for the protest actions, the administration was putting into his cell mentally ill persons, persons with pediculosis, persons, who provoked fights.
Mikalai Statkevich, who recently went free after serving fifteen days of arrest for same actions on 8 September, said that a man with a tuberculosis was placed to his cell.
Belarusian Christian Democrats are asking the international community to respond to what is happening in Belarus. Vital Rymasheuski, BCD co-chairman, said that political activists are often put in torture conditions in prison, when they serve their sentences for five, seven or fifteen days. This is being done in order for them to become infected with dangerous diseases. “We draw attention to the fact that against the background of the expansion of cooperation between international partners and official Minsk, the repressions against the independent civil society and the opposition have only intensified. I believe that connivance, the absence of a strong reaction to these repressions, stimulate the authorities to continue the destruction of the democratic forces of Belarus,” – said co-chairman of the BCD.