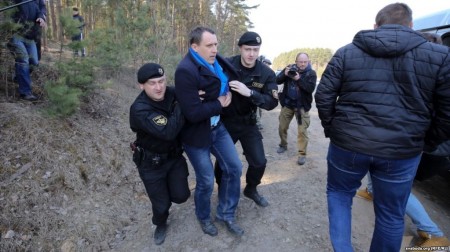 Pavel Seviarynets, BCD co-chairperson, was detained on 5 April 2019 in Kurapaty, the mass grave memorial of victims of Stalin’s repressions.

On Monday, 8 April 2019 he was sentenced to 15 days of administrative arrest.

Kurapaty came again to the center of attention in Belarus due to the demolition of wooden crosses, which started on 4 April 2019 without any prior information and was sanctioned by Alexander Lukashenka.

Hundreds of people gathered in Kurapaty on the same day for the common prayer and cross procession. Leaders and representatives of Christian confessions including, metropolitan Tadeush Kondrusevich of the Catholic Church in Belarus expressed their astonishment by the actions of the authorities and called to a broad public discussion on the issue on Kurapaty.

Among the news describing the present worsening of the situation with the human rights in Belarus:

– persecution of participants of the public protest in Brest

– police raid in the office of Belsat channel.