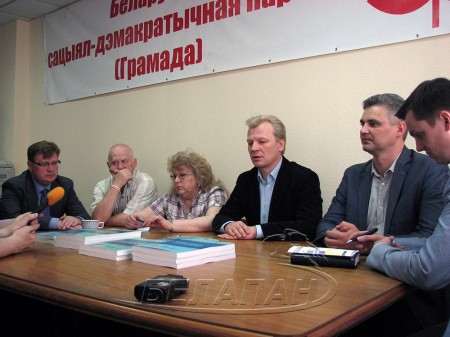 “Right to Сhoose” member organizations – Belarusian Christian Democracy Party(BCD), Belarusian Popular Front Party (The BPF Party), “For Freedom” Movement, United Civil Party (UCP), Belarusian Green Party, Belarusian Social-Democratic Party “Hramada” (BSDP), Belarusian Trade Union of Radio-Electronic Industry (REP), organising committee of Party of Freedom and Progress (PFP) – testify that for the last two years (2018-2019) no positive changes towards democratization of the Electoral Law and election process have taken place in Belarus. At the same time, new legislation has been introduced, which even more restricts freedom of assembly and freedom of speech; attacks of the state power structures on independent journalists have continued.
For those reasons we are strongly against that the Belarus National Assembly delegation be restored in its special guest status at PACE.
We believe Belarus should become a full member of the Parliamentary Assembly of the Council of Europe on equal conditions with other European nations after fulfilling all the obligatory requirements, including death penalty moratorium and recognition of supremacy of the European Court of Human Rights. Fulfillment of these requirements will provide the Belarusian citizens with new opportunities in protection of their rights and freedoms.