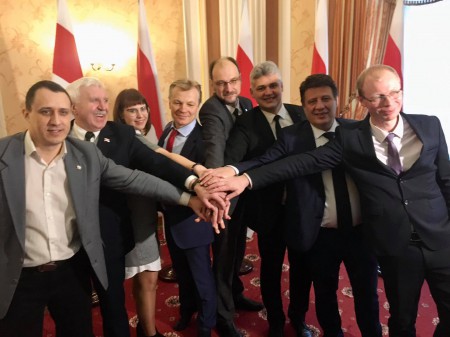 “The opposition has teamed up to select a common candidate in the presidential elections for the first time in 15 years – since 2005. We agreed that no matter who is elected the single candidate, we will work together to support him/her and will not nominate or support any other candidates”- said the chairman of the Movement” For Freedom ” Yury Hubarevich.

The Belarusian society has a clear request to the emergence of the single candidate, who will represent the alternative to the dead-end course of the current government. The candidate’s name will be announced in the second half of May, and it “will be the only viable and independent competitor today’s head of state.”

“Our goal is to win. However, it is only possible with participation of the large number of citizens in the campaign of the common candidate and defending the right to fair elections in Belarus. We will work together to involve the widest possible range of citizens in the process of nominating the common candidate and his/her campaign and protection of the people’s choice “, -. said co-chairman of the party Belarusian Christian Democracy, Vital Rymasheuski. According to him, the team not only offers an alternative to Lukashenka, in the person of the common candidate, but also a programme of systemic reforms, as an alternative to the policy of the current government. Proposals it will be prepared and collected during the primaries and will be used in the common candidate’s campaign and after its completion.

“We understand that the government is afraid that the current head of state no longer has the support of the majority of Belarusians. For this reason, sparring partners for Lukashenka will be allocated, and at the same time the authorities will try to allow the registration of the common candidate (candidates must obtain at least 100 thousand signatures of voters). In the case of non-registration of the common candidate or mass repressions against the leadership and activists of the campaign, the decision to organise an active boycott campaign may be taken”-  Mr. Rymasheuski stated.

The primaries procedure, as explained by the acting chairman of the United Civil Party, Mikalai Kazlou,  will consist of four components: a vote in the regions (30 points), a vote on the Internet portal (30 points), the final vote at the Congress of Democratic Forces (30 points). Another 10 points will be distributed between the participating organisations of the procedure.
“One of the primary tasks is to ensure the political competition among the members of the campaign, equal opportunities and fair vote count,” – said Kazlou.

Participation in the primaries is open to participating national organisation and to anyone with the confirmed team of 200 activists. Each applicant must agree to support six criteria:

1) advocating for independent Belarus and against dictatorship,

2) protection of social and economic rights of citizens of Belarus,

4) termination of the Union State of Belarus and Russia and withdrawal of foreign military facilities from the territory of Belarus,

5) promotion of the Belarusian language and culture,

6) good-neighborly equal relations with the EU, US, Russia and other countries.

The common candidate also should support the idea that any interference of external forces in the internal affairs of Belarus is unacceptable. After the election of the common candidate, he/she will need be offered to sign the politician agreement.

The presidential elections 2020 in Belarus will be held in the conditions of unprecedented violations of the rights to pubic assembly and peaceful protest, freedom of speech, mass media, organisation, etc. Active solidarity with the Belarusian citizens is needed more than ever.