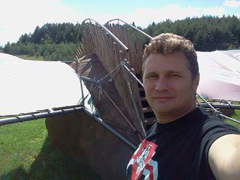 On 26 March 2015 Siarhei and Mikalai Verameyenka (father and son), activists of the Belarusian Christian Democracy Party in Hrodna, have had their license revoked by the Ministry of Transport, thus being deprived of the opportunity to earn a living by passenger carriage.

Siarhei Verameyenka is the BCD city coordinator for Hrodna city. In 2013 he had implementedthe campaign for the rights of taxi driversin Hrodna, after which he gained special attention of the controlling authorities.
Also in the same year both Siarhei and Mikalaiwere persecuted for their political activities.

The situation with Verameyenka family is a direct evidence that the Belarusian regime has no real intention for democratisation. The BCD calls for solidarity
with the activists of the democratic movement in Belarus!