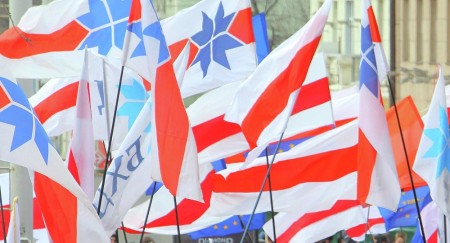 Prior to the Congress, Christian Democrats were holding meetings in all regions of Belarus and collecting signatures of the party founders.

On 22 January 2018 the BCD submitted the application for registration as a political party to the Belarusian Ministry of Justice.

The documents were signed by 1,072 founding members; according to the current law 1,000 founders are needed for registration of a political party in Belarus.

In all previous attempts the Ministry of Justice violated the national law by transferring the data of the BCD founders to the security services and the founders of the BCD were intimidated and blackmailed. Some of them were forced to call back their signatures and the Supreme Court accepted these refusals as reasons to count the whole list of founders as invalid.

During the last week (5-11 February 2018)  the BCD co-chairpersons were informed that the party’s founders are receiving calls from the local authorities (municipal executive councils); the Christian Democrats are being whether they have really signed the founding documents of the BCD. At least one party founder was offered cooperation with the Belarusian State Security Committee (KGB). The organisation which provides the legal address for the future BCD office was also examined by the authorities.

The BCD is asking its partners and sister parties to support the process of the party registration with public statements, inquiries to the Ministry of Justice ([email protected], http://minjust.gov.by/be/ministry/contact) and the Presidential Administration of Belarus (http://president.gov.by/en/press_service_en/). The Ministry of Justice is obliged to issue the decision on the BCD’s application by 26 February 2018.

International attention and solidarity is key for the life and work of democratic opposition parties and civil society organisations in Belarus.