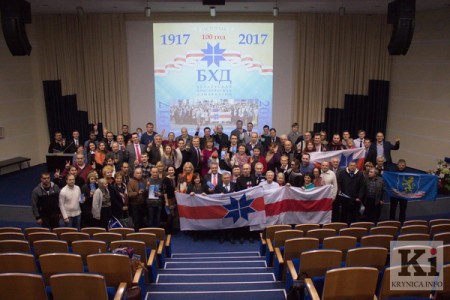 On 23 December 2017 the Belarusian Christian Democracy Party (BCD) held the seventh congress for state registration, which was attended by 110 delegates from all regions of Belarus and more than 100 guests. All previous attempts of the BCD to obtain state registration were turned down the Ministry of Justice. In total more than 20 attempts to get а legal status including the registration of national, regional and youth organizations of Christian Democrats were rejected by the Belarusian authorities.
The documents for registration of the Belarusian Christian Democracy Party will be submitted to the Ministry of Justice before 22 January 2018. The success of the current application largely depends on the support of the international democratic community.
The past BCD congress was dedicated to the 100th anniversary of Belarusian Christian Democracy party founded in 1917, which until 1939 operated on the territory of Western Belarus. The public and political leaders of Belarus – Mr. Dzmitry Dashkevich (former chairman of “Young Front”, Mr. Anatol Liabedzka (chairman of United Civil Party), Mr. Yury Hubarevich (chairman of the movement “For Freedom), members of the House of Representatives of the National Assembly of Belarus Mrs. Anna Kanopatskaya  and Mrs. Alena Anisim –  greeted the delegates. President of the European People’s Party, Mr. Joseph Daul, has sent his greeting to the delegates; it was warmly welcomed at the Congress.
The leadership of the BCD has been expanded to four people at the congress of 23 December. Ms. Volha Kavalkova was voted in as the new co-chairperson (until now the Christian Democrats were led by Mr. Vital Rymasheuski, Mr. Pavel Seviarynets and Mr. Heorhi Dzmitruk). Previously she has worked as the leader of the BCD branch in Minsk city and coordinated national social campaigns of the party, such as “Protecting our children from alcohol”,” For quality medical care”,” For clean water “and others. Volha Kavalkova is the first female party leader in the history of the BCD.
In her address to delegates of the Congress, Ms. Kavalkova stressed the importance of work to change the laws and public policy in Belarus here and now, even not being at power position. In particular, she highlighted the problems, which the Christian denominations in Belarus are facing. “The Protestant denominations experience problems with the legal status of their activities, legal registration and premises for the churches, the Catholics have the problems to bring foreign priests to the country, the Orthodox have difficulties to return the property confiscated during the Soviet time. And we want to assist in solving these issues. For this purpose we need a good law on freedom of religion, which would provide for equal conditions for the development of all Christian denominations, “- Volha Kavalkova said.
Christian Democrats traditionally take an active part in the political campaigns in Belarus. Presently more than 100 candidates for deputies in the local councils apply for registration; the voting day of local “elections” is 18 February 2018. With respect to the local election campaign the BCD Congress adopted the statement, which takes notice of no positve changes to the electoral law and preparation of total fraud. In these circumstances, the BCD uses the possibilty given by the law to carry out information and education campaigns among the country’s population. The potential candidates are holding pickets and meetings with citizens. The interested activists can also take part in the election observation within the framework of the campaign “Right to Choose”.
The BCD also “condemns any attempt to link the assessment of the political situation in Belarus with the number of deputies from the opposition, which may be included into the local councils after 18 February  2018. In the absence of free and fair elections, the number of the opposition representatives, appointed into the local councils, can not be a criterion for the assessment of the situation with the democratization of the country.”
The final resolution of the BCD Congress touches on sensitive issues of social and political life. The Christian Democrats demanded, in particular, that all political prisoners in Belarus are released and those convicted for political reasons are rehabilitated, the shameful practice of “repressive laws in Belarus, the restriction of fundamental rights to freedom of assembly , expression and association, as well as giving additional powers and immunity from prosecution to the officials of the State Security Committee (KGB)” is stopped.
In connection to the policy of the democratic countries towards Belarus, the BCD reiterated its appeal “to conduct a critical dialogue with the Belarusian authorities based on the values ​​and priorities of human rights.” “The support that is being granted by the EU to Belarus should be primarily aimed to improve the conditions of life of Belarusian people and not support and work for preservation of the existing regime. To do this the BCD calls on the responsible EU institutions to make dialogue with Belarus more transparent for Belarusian citizens, civil society of Belarus and to make them full-fledged members of the EU dialogue with Belarus, “- the document says.